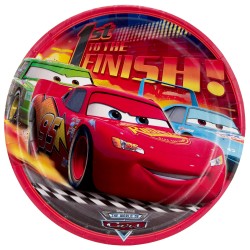 Zooooom! Heads spin with the speed of the race cars at the Piston Cup Finals where Lightening McQueen takes the lead! It’s a sprint to the finish line for the most awesome, amazing Cars Birthday Party!

Making invitations to look like a NASCAR admittance ticket would be great, writing things like “Gates open at ____” and “(Birthday Child Name) Cars Party Series.” Another option is decorating red cardstock with Disney Cars stickers. There are also pre-made invitations available, too. In fact, you can find colorful party supplies to go along with your theme, as well.

The kids will love having their pictures taken with Lightening McQueen or the rest of the Cars crew by using a standup or background scene. Then they can move on to the fun games.

Party favors filled with Car-themed items will delight all the kids.

Racetrack grub such as grilled tires (hamburgers), pasta salad, fruit skewers, and pit stop snacks like pretzels, goldfish crackers, and M&Ms are just the thing to fill up the kiddo gas tanks. Yum!

Subscribe to ourRSS feed and get all the latest news on party ideas and party themes. Thanks for visiting!

Hot Deal of the Month!