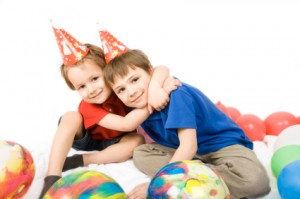 Boys will be … um… boys! Those rambunctious little daredevils capture our hearts with a single look, so let’s capture their imaginations and memories with birthday party themes just for them! These are some of the more popular party themes for boys, so take my sampling of ideas and get wild with your own…

Secret Agent (or Undercover Spy) Party
We all remember those days when the Mission Impossible soundtrack was running in our head as we cautiously turned a corner, seeking some unknown assailant or hunting down a hidden bomb… And kids today do the same thing!
–    Make up your own invitations by creating a Spy Emblem (like the CIA’s) on the front of cardstock and wording it with, “Your mission, should you choose to accept it, is to attend ______ birthday party.” On the bottom, write something cool like, “this invitation will self-destruct in 4 minutes.” There are also some cute Personalized Invitations you can use, too.
–    Agents travel all over the world on a regular basis, so I am sure they have developed a taste for worldly fare. Think Mexican beans or cheese quesadillas, Chinese Chow Mein, or Italian Meatballs!
–    As your agents arrive, give them an “alias” and some dark shades to wear. Send them to the “check in” table to create their own ID Badges. Assign them a mission of finding and diffusing hidden bombs before the party is blown to kingdom come! You can set these up with Styrofoam balls spray painted black and a short piece of red pipe cleaner sticking out.
–    Awesome for ages 6 and up!

Super Mario Birthday Party
The Mario Brothers have been around a long time and certainly haven’t lost any of their popularity! Decorate your intended locale with red, blue, and yellow streamers, star shaped balloons, and a cool Super Mario Stand-Up that the kids can get pictures with!
–    Super Mario runs through a crazy obstacle course of sorts to rescue the princess, so set up your own obstacle course for the kids! You can also play “Mario Says…” (just like “Simon Says”) or “Musical Mushrooms” (same as “Musical Chairs”).
–    For food that Super Mario would want to get his hands on, think about pizza or, better yet, Mushroom Burgers! You can also serve veggie trays, fruit, yummy chips and dip, but be sure to get some chocolate gold coins to decorate the food table with.
–    Probably most suited for ages 4 up to about 12

Transformers Birthday Party
Cars that transform into Alien Robots are only the coolest things ever!  Encourage your guests to bring their own Transformers toys, but be sure to have more on hand just in case.
–    In addition to playing with their wickedly cool Transformers toys, the kids will definitely get into games like “Seek the Allspark,” where they search for the little gray cube you hid earlier in the day. Creating their own robot is a great idea, as well, and this can be done with Lego’s or odd spare parts you have lying around (old computer chips, pipe bits, cartridges, etc). You can also set up Coloring Stations (print out coloring sheets from the Internet), a Transformers Tattoo Station, and even a Transformers Piñata.
–    Personally, I think the Transformers really like living here on Earth and dig good old fashioned American food, so serve up some pizza, burgers, hot dogs, French fries, and popcorn! Your cake can be a simple rectangular cake with a Transformers cake topper.
–    Fun for any age, particular those between 8-12 years old

Thomas the Tank Engine Birthday Party
Your young tot will delight at a party theme featuring Thomas the Tank, Percy, and other chugging train friends!
–    Invitations made to look like boarding passes is a cute way to set the theme. On the big day, plan your party fare to include sandwiches that look like train cars (stack your favorite sandwich with four or five layers of bread and cut off the crust. On the bottom, insert long pretzel sticks as axels and pierce with a grape for the wheels). Pasta salad, veggie trays, fruit trays, and sugar cookies are good choices, as well.
–    After you’ve handed out Engineer Hats to your crew of kids, they will enjoy fun games like “Red Light, Green Light,” a Bean Bag Toss into train cars, or “Hot Locomotive” which is played like “Hot Potato.” Kids always love to go home with Thomas party favors like stickers, flashing train key chain, crayons and activity book, Thomas the Tank blowout, and/or a train whistle!
–    Definitely a toddler – preschool friendly party!

Star Wars: The Clone Wars Birthday Party
“May the Force be with you…” as you throw an awesome Star Wars themed birthday party! We all grew up with the sci-fi thriller, so you can revel in the coolness with your kids!
–    Print out cool pictures of Yoda, Darth Vader, and Luke Skywalker to decorate the front of a self-made invitation with the phrase, “Invited You Are…” or you can get some groovy pre-made ones. Food can be simple such as Grilled Cheese sandwiches, fruit kabobs, potato salad, veggies and dip, and popcorn.
–    Hosting your own “Clone Wars” will be exciting for your guests! Split everyone into two teams (Droids and Clones) and have them compete as teams, earning points for each skill game the team wins. Games can include traditional activities like Three-Legged Race, Bean Bag Toss, Pass the Egg, etc. You can also set up an obstacle course for “Jedi Training!” And, you HAVE to have a Darth Vader Stand-Up for pictures, only because it is the coolest thing EVER!
–    This type of party is geared towards 8-12 year olds, but might also be fun for those a few years younger.

Subscribe to ourRSS feed and get all the latest news on party ideas and party themes. Thanks for visiting!

Hot Deal of the Month!